A few weeks ago I was getting off a train when I saw a rather odd advert – a picture of a pair of eyes peering sneakily to the side and text advising tax evaders that the government is coming for them. I guess this was the precursor to the government PR campaign against offshore tax evaders unveiled on the Guardian website today.

If you’re evading tax, you probably know the risk you’re taking. And instead of providing resources for the tiny team tasked with chasing down this money, or closing some of the UK’s own tax havens, the government rolls out a poster campaing.

As with the immigration PR campaign, they’re not talking to the tax evaders, the government is telling the rest of us that they’re working on it. I wish they’d  just direct the money to chasing people down.

“Well, now the international community does know… There will be no excusing of failure of action because we didn’t know. Too many times in this building there are reports and no action. Well this is a time for action.” – Michael Kirby, chairman of the independent Commission of Inquiry

Someone said recently (I can’t remember who) that the slave trade survived as long as it did because we tolerated it. On Monday, the United Nations Commission of Inquiry on Human Rights in North Korea published its report, which concluded that the regime in North Korea is committing crimes against humanity and recommended that those responsible are held accountable, through a referral to the International Criminal Court, or a UN tribunal.

According to Christian Solidarity Worldwide, which has long advocated for the Commission and the investigation of crimes against humanity in North Korea, the 400-page report details crimes against humanity including “extermination, murder, enslavement, torture, imprisonment, rape, forced abortions and other sexual violence, persecution on political, religious, racial and gender grounds, the forcible transfer of populations, the enforced disappearance of persons and the inhumane act of knowingly causing prolonged starvation”. It concludes that such crimes against humanity are continuing “because the policies, institutions and patterns of impunity that lie at their heart remain in place”.

I was privileged to attend a hearing in parliament in October last year in which North Korean defectors told their stories. One woman in her 60s, Mrs Kim, cried during her testimony about life in Yudok prison camp.

“My heart still breaks when I think of my parents and son who died in Yudok,” she said. She described piles of dead bodies, and being so consumed by hunger that she and other prisoners would eat the grains from cow dung.

Despite the passage of time, her grief was still raw. We owe it to Mrs Kim and thousands of North Korean citizens like her, to keep our anger at the injustice of the regime fresh. It should spur us on to do something to help. We must not accommodate, we must not tolerate this any more.

She Has a Name

I wrote this for Independent Voices: “In the storm over Mark Harper, another immigrant to this country has been dehumanised and fogotten.”

It was a bit weird watching David Cameron make a speech in favour of the Union….from the Olympic Stadium in East London…addressing everyone else but the Scots.

I also saw Alex Salmond’s rebuttal, in which he pointed out that one of the most compelling arguments in favour of independence is that Scotland keeps voting left and getting Tory governments in Westminster.

I don’t have a dog in this fight and I understand both sides of the argument. Perhaps it’s because I live in England, but it seems like everyone is hell-bent on scolding or frightening the Scots into making the “right” decision. The BBC presenter’s response to Salmond was to point out that “business” wasn’t in favour of a split. Cameron is asking the rest of the UK to….what exactly? Pressure the nearest Scot?

Speaking as an African, I know that independence is as much an emotional issue as a practical one. Facts about the consequences of independence aside (and those are heavily disputed as it is), there is Scotland’s national story. No one has yet addressed this issue with a historical context, acknowledging that this is about more than just economics or brand UK. Or the rest of us that Cameron addressed today. It’s Scotland’s choice, and we would do well to start talking to people, rather than down at or about them.

I spoke to Grazia Magazine, as a member of Media Diversified, about the Vanity Fair Hollywood Issue, widely touted as its most diverse yet. 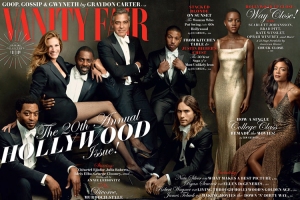 A regular aspect of life as a migrant is keeping on top of immigration changes that could affect your visa…and the fee rises. Migrant Rights has the details on the latest fee rises.

“The biggest increases fall on family members of migrants who are residing in a category which entitles them to take employment. To prove to employers that they have such an entitlement the family member is obliged to obtain an Immigration Employment Document (IED), and from 6 April will have to pay £601, up from the current £433, and increase of 38.8%

The unit cost to the Home Office of processing these applications is well below these amounts. Naturalisation typically costs £144 to process, IEDs come in at £278.”

I don’t think most people are aware of how high these fees are, but I suspect that the government’s argument that the fees reflect the value of the visa to migrants would really resonate with a lot of the public.

What’s staggering though, is how much the fees are and yet how inefficient the UKBA continues to be. A recent Freedom of Information request revealed that the agency is still flailing in terms of efficiency – amidst this disarray, the government’s desire to extend border to checks is farcical. But it won’ t stop the Immigration Bill.

Meanwhile, behind the figures are human beings whose lives may be on hold while they await a decision, or an appeal.

We appear to be having something of a moment in terms of talking and thinking about Black history and participation in British life.

The success of 12 Years A Slave may have something to do with it. The fact that a Black British Director is up for an Oscar, for telling the American story of Slavery has prompted a few reflections on Britain’s own history of slavery, but also the present day, with regard to the creative industries and the drain of Black British acting talent to the USA. I’ve blogged about this in a few previous posts, but here are four stories (three new, one older) which have surfaced recently on this theme:

Two. More on the UCL project on slavery – reports on the payouts given to British slaveowners after prohibition.

Three. A reposted article from 2012, on the Black British Tudors missing from history.

Four. Lenny Henry’s blog on access to the film and TV industry by ethnic minorities.

I was also amused to read today that Michael Gove has a poster of Malcolm X and Martin Luther King on his wall – despite the fact that the Civil Rights struggle in the UK is overlooked in the curriculum and one of his early changes was to try to downgrade Mary Seacole in the curriculum.

History matters because it informs the present. Britain has long been diverse, though many try to portray this as a New Labour project that began in 2007. One thing I’ve learnt from listening to Acts of Union and Disunion on Radio 4 is how these islands have always been in flux.

History is important because we can’t tackle structural racism and other issues without understanding how they came about. But just as importantly,the story of Black people in the UK needs to be more fully told because it’s Britain’s story too.