Last winter two bodies were found in Norway and the Netherlands. They were wearing identical wetsuits. The police in three countries were involved in the case, but never managed to identify them. This is the story of who they were. 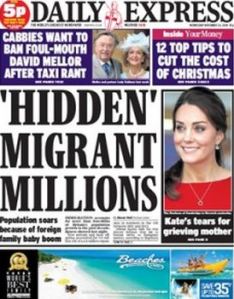 I’ve just finished the chapter in Angier’s excellent book, “Woman: an intimate geography” where she unpacks the mystery and the wonder of the ovaries and human egg. I don’t have kids (yet?) but I now rest in the knowledge that I am not only carrying around potential lives within me, but migrants. Because no matter who I marry, as I am a migrant, the Daily Express assures me today, my (potential) children are part of a hidden horde of migrants, poised to invade Britain from within.

The stain of migration will apparently never wash clean.* I’m sure my children will emerge from the womb with a benefits form in one hand and the keys to a council house in another. They will go on to steal a “real” British child’s nursery place, which is really just a warm up for snatching their job later. And their benefits. At the same time.

For two weeks in that heady 2012 Olympic summer, Britain was proud of her diverse history. The Mail’s “plastic Brits” splash featuring Mo Farah and others (Brits by passport only, not really one of us apparently) was derided as ridiculous and nasty.

It was a good summer. And now we’re in a long, cold winter of discontent in the run-up to the elections. The race to exclude has gone from non-EEA migrants, to EU migrants, to anyone who marries a migrant,  to the next generation – who are, for all intents and purposes, British. Where to next? It’s a shameless race to the bottom. Perhaps as more and more of the “right” Brits get ensnared in the net of suspicion there will be a collective pushback. Are you loving the right person? Are you having kids with the right person? Now….where in history have we seen this sort of insidious messaging before?

* and this is why I wear the label of migrant with pride.

It was a very good year

2012 was *the* year for becoming a British citizen, according to the Times, who report that 193,000 new citizens got their British passports that year, a nine per cent increase on the year before. They’ve crudely titled the article “The Great Passport Giveaway”.

Cute. Except, of course, that a passport is not free, and never “given” to anyone. You may be granted citizenship if you are an asylum seeker, but even that process is convoluted, painful and subject to agonising delays – if your appeal is accepted. For others, if you’re a non-EEA citizen, it takes at least six years. Six years during which, contrary to popular belief, you’re not eligible for benefits. And you have to get indefinite leave to remain first, which costs about £1,000. A year later you could apply for your passport, which costs about the same. Before that you will have paid for whatever visa you’re on, extensions, a Life in the UK test, postage, and when you get to the citizenship ceremony, the service itself. In fact, the passport involves yet another interview and you pay about £90 for the privilege. It’s certainly not an entitlement. However, when there are these sorts of bitter articles denigrating newly-minted citizens, is it any wonder that some end up feeling disconnected from the State? Integrate! You’re told, but you’re rebuffed at every turn. You have to constantly ready to “perform citizenship”, to be the best version of an idealised citizen* because you are always, always on probation. Integrate, how, if you won’t let us?

I became a citizen in that “bumper crop” of 2012. It was a surprisingly emotional process, and finally, I felt like I was home. I have another home. But I have a life here too. But what was different was the feeling that over 11 years, I have earned my right to belong. Like so many before and after me, I’ve paid my dues, I’ve participated. I’ve loved and lost here. I’ve laid down roots. But this is apparently bad. What was interesting in the comments within the article, from Keith Vaz, is that immigration is considered an unalloyed bad – with no upsides. We’re now moving past quibbles about what sort of migration works for Britian – or doesn’t – to a universal message that it’s the root of every problem:

“Keith Vaz, chairman of the Commons home affairs select committee, said: “This is an extraordinary figure. To be responsible for a quarter of all new passports issued to migrants in the EU flies in the face of suggestions that settlement and migration is under control.”

Is that surprising, when every problem is refracted through the lens of migration? Didn’t build enough houses? Migration. Can’t get your kid into a school? migration. Austerity ripping the welfare net to shreds and pulling the carpet out from under your feet? Migration. And what distorts the debate is that the tolerant majority aren’t as exercised as the rabidly anti-migration minority. For them it is the only issue, the one that gives all others their salience – the touchstone for every ill visited upon Britain. So they shout the loudest. And yet, research shows that the public at large has nuanced views on this. But no one appeals to this tolerant streak. If Keith Vaz is speaking for Labour, then what of the Tories and UKIP? This is a happy consensus, a craven alliance of the cowardly. Because rather than aim their big guns at the real culprits (banks, anyone? ideologically-driven economic policies such as austerity? lack of planning?) for the individual problems I’ve mentioned, they offer small politics that appeal to the lowest common denominator. This dearth of information and compassion has far-reaching effects. We’re prepared to let people die in the Mediterranean to reduce the “pull factor” to the UK. When Mark Reckless says that migrants should be piled into boats at Dover and sent away, even UKIP balked. But I’m sure many agreed. He wouldn’t have felt confident in saying so otherwise.]

*incidentally, some migrants are brilliant. Some are awful. Some are mediocre. Because, you know, HUMANS. And hey, Britain, so are you. So are you.

Maybe it was the headline that made me feel a bit…..uneasy. “The poppy hijab that defies the extremists: British Muslims urged to wear headscarf as symbol of Remembrance” (Daily Mail).

The designer told the Daily Mail: “Thousands of British Muslims already wear a poppy in November. This is just another way for them to show they remember those who gave their lives for their country.

It’s also a way for ordinary Muslim citizens to take some attention away from extremists who seem to grab the headlines.

This symbol of quiet remembrance is the face of everyday British Islam – not the angry minority who spout hatred and offend everyone.”

I think the impulse behind it is admirable and that the designer has a positive vision.What makes me feel slightly uncomfortable is the whiff of Muslims having to prove their allegiance to Britain, that we’ve seen more and more as “Islamic State” continues its toxic and violent campaign. True, the extremists all too often grab the headlines and it’s not easy for the moderate majority to be heard.

And I suppose, Remembrance Day is as close as Britain comes to a uniting national narrative. I love Remembrance Day, the solemnity, the knowledge that so many, from around the world (especially the Commonwealth), fought alongside each other for the society that we enjoy today. But there is a coercive element to the poppy wearing campaign every year and the vilification of those who choose not to, such as newsreaders Jon Snow and Charlene White. Charlene White explains her decision beautifully.

But there is sometimes an undercurrent that unless you have a stake in that fight, that you don’t belong. And all too often, it’s ethnic minorities who are both very visible and carry a burden of proof for their citizenship and belonging. Muslim women are among the most visible, and often the victim of Islamophobic attacks. If they want to wear the poppy hijab, more power to them. But we don’t have the right to make assumptions about the beliefs and values of those who don’t. They shouldn’t have to “perform citizenship” to belong. We ought to extend them the benefit of the doubt that they aren’t pro-extremism simply because they don’t refute it in the way that makes the majority happy.

I suppose the poppy hijab makes me slightly uncomfortable because it’s more about us than about the women wearing it. And it’s more about what’s going on today than what happened in the war.

“A tough life needs a tough language—and that is what poetry is. That is what literature offers—a language powerful enough to say how it is.”

I have just discovered the searing, startling literature of Jeanette Winterson (so, so late to the party that the lights are on and everyone has stumbled blinking into the dawn) –  and in line with her excellent quote above, I am posting some great spoken word – poetry and prose – that offerspowerful reflections on migration, belonging and Britishness.

The British by poet Benjamin Zephaniah

and the Migrant Manifesto by writer, commentator, activist (and my favourite football pundit), Musa Okwonga.